Most Alzheimer’s caregivers realize early on that we have little control over what any day will bring. Planning each day in advance may give us a sense of control, but so much of Alzheimer’s is unpredictable. Based on my experience, caregivers spend at least as much time reacting as acting. 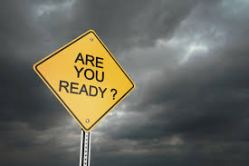 One of my mom’s major goals in life was to be prepared for anything that might happen to her or her family. I remember her purse was both tool box and first aid kit, containing a screwdriver, bandages, string, scissors, various nuts and bolts she had found on streets and sidewalks—once I even saw a fish stringer in there. But the things we used most often were the tissues she always carried. She stuffed her already bulging purse with them and stashed them in every pocket on any piece of clothing she wore, “just in case.”

“Just in case.” That phrase covers a lot of territory for caregivers. We can’t predict what might happen in the next few minutes, much less the next few hours. But…unpredictable doesn’t have to mean unprepared.

For caregivers, being prepared is a state of mind.

I wish I had seen that truth earlier. Instead, of all the emotions that rolled over me during my first weeks of caring for Mom, fear was predominant.

Fear hung around long after shock left. I spent only a couple of weeks being surprised at things like Mom putting Dad’s shoes in the trash, or telling me how lovely the artificial flowers smelled at the grocery store, or accusing the neighbors of peeking into the windows. I soon learned such things were simply to be expected.

Anger lasted longer. I was angry at the disease, at my father for hiding it for so long, at myself for missing the signs, and, yes, sometimes at my mother who often seemed to enjoy the chaos she created. But after a while, anger became a motivator. My frustrations prodded me to look harder for cause and effect relationships I could use to smooth the rough road we traveled each day.

For example: I learned I didn’t always have to explain to Mom what I was going to do. Announcing I was about to brush her hair or help with her shoes often resulted in a barrage of “No’s,” maybe because she felt I was telling her what to do. So I began to say less and simply do what had to be done. When my actions were a surprise to Mom, it took a minute or two for her to puzzle them out. By that time the job was usually finished. Using the disease against itself lessened my anger and fueled my confidence.

Still, fear of catastrophe stuck around for a long time. I was afraid the time would come when I couldn’t control Mom’s anger and she or someone else would get hurt. Would I be able to get her to take her medications every day? What if I couldn’t make her get into the car? Or out of it?

Adding to the pressure of my fear was the feeling I absolutely had to make things work. I had stepped into caregiving of my own accord. No one asked me to. Dad couldn’t do it alone, and he refused to allow a nurse or professional into their home. So, ignorant of what I would be facing, I just jumped in. But after only a few weeks, I began to question whether I could manage Alzheimer’s alone. I started each day with dread, praying for help, praying for a miracle.

And you know what? Miracles came. Not the sudden cure I hoped for, but miracles nonetheless. Little ones I almost didn’t notice at first, like a close-in parking space when we were running late to an appointment. There were big ones, too, huge ones like the doctor who finally found that Alzheimer’s wasn’t the only danger Mom faced: He diagnosed her severe depression and prescribed the medication that gave her, for a while, more good days than bad. 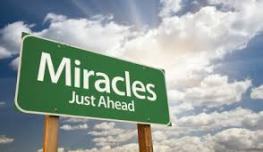 In fact, so many miracles came my way, I began to expect them. On some otherwise-impossible days, Mom would at least agree to take her meds. When we were out of the house, I realized people seemed to sense her instability. I learned how to steer her away from situations that, I knew from experience, might provoke her anger. If she refused to get in the car, I postponed the errands and rescheduled the doctor’s appointments. If she refused to get out, I sat with her until she got tired of saying no.

Although some of the solutions worked pretty reliably over time, I knew no amount of advance planning could ever address the daily challenges of Alzheimer’s. But I was freed from paralyzing fear because I began to expect an answer in difficult situations. And because my trust was based, not on my power, but on the power and faithfulness of God, I stopped imagining disaster. Because I believed  the Giver of all good gifts, the Maker of all miracles,was on my side, I could think more quickly and clearly, come up with a way, find one more miracle.

As the Alzheimer’s progressed, Mom continued to pick up her tissues and put them in the pockets of the old green cardigan she wore every day. I took a few out every now and then, secretly of course, so she’d have room to add more. The day came, though, when it no longer occurred to her to pick them up. So Dad and I did it for her. Putting a fresh tissue, carefully folded, into her sweater pocket made us feel a bit more powerful in the face of Alzheimer’s. “Now, Mama,” I’d say. “Now we’re ready for anything.”

For me, the miracles that carried us down the rocky roads of Alzheimer’s are like tissues I saved in the pocket of my spirit. There were so many problems, but so many more miracles. And each problem solved was a promise of more solutions to come.

I pray you fill your own pockets with confidence. Begin to expect miracles. Watch for them. And in the hardest times, remember the ones God has already sent. Each one carries His assurance: He is with you, to help you. He will never leave you alone.

With a pocket full of faith, we’re ready for anything.

You will not need to fight in this battle. Position yourselves, stand still and see the salvation of the Lord, who is with you….Do not fear or be dismayed… for the Lord is with you.     (2 Chronicles 20:17   NKJV)

Loving Father, we know You are on our side. We know You can do all things. We know You want us to come to You with our fears and our needs. Thank You for fighting on our behalf. Even in the face of Alzheimer’s, Your constant love casts out our fear.