Crossing Beaver Creek on I-45 headed north out of Houston, I marveled at signs of the warm winter. The shoulders of the highway were freshly mown. Beyond the fences, pastures had claimed green victory over their thin brown blankets of last year’s foliage, and trees already boasted a light beard of adolescent leaves. I glanced up at my dashboard thermometer: outside temperature, 80 degrees. December 21 in southeast Texas.

“In the bleak midwinter, frosty wind made moan….” The words of a favorite carol filled the car, borne from front seat to back on an air conditioned breeze. “Snow had fallen, snow on snow, snow on snow….” I found it difficult to imagine myself traveling through a cold afternoon, headed toward a colder night in Bethlehem. The earth was green around me, not white. Not even the sky would cooperate. Pushed north by a wet south wind, clouds overtook me. They crowded out the blue overhead and made shifting shadows across the fields.

The warm, humid afternoon moved relentlessly on toward a warm, humid evening and what would be a dark, starless night. If this weather held for the next four days, and it almost certainly would, modern-day shepherds would have no beacon to lead them to the stable. 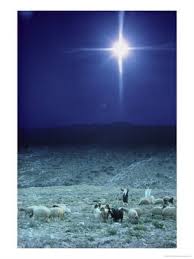 “Earth stood hard as iron, water like a stone….” Cruising up the highway, I was glad for an easier trip than Bethlehem’s sheep herders had faced. I made it back to my own tiny flock just about dark. They were pretty much where I had left them on the sunny day before, but bleak midwinter had moved in with a chill, as it was wont to do. Mom sat in her chair, shuffling her feet, restless with confusion and fear. Dad slumped in the chair beside her and, lethargic with fatigue and hopelessness, half-watched the six o’clock news on TV. This room was even darker than the sky over Beaver Creek—no haloed moon, no twinkling star, not even a fluffy white cloud.

I brewed tea for Mom, let it cool to lukewarm in her cup, then held it out to her. “Tea, Mama?”

With a slap at my hand, she declined.

Dad didn’t want tea either. You can lead your flock to the kettle, but you can’t make them drink. So we sat in silence—Mom still shuffling her feet, Dad still watching the news—while I prayed for a Christmas miracle.

When it arrived, as I knew it would, it was heralded in song.

The kindergarten class from a local school closed out the newscast with five minutes of Christmas songs.While they bounced on their toes through Jingle Bells, Mom asked, “Who is that?” When they made snowball-rolling gestures through Frosty, she stopped shuffling, reached out to touch my father’s arm, and said, “Look, Daddy. Look what they’re doing.” And when they warned us with stern faces that we better watch out because Santa Claus was coming to town, Dad’s chuckle became a laugh. Mom looked from the TV to his face, then turned back to the screen and the singing children. And smiled.

The clouds of confusion and fatigue broke. “Angels and archangels may have gathered there/Cherubim and seraphim thronged the air.” In the bleak midwinter of Alzheimer’s, Mom and Dad and I lived the Christmas miracle. We saw the star and heard the angelic choir, their singing as sweet and innocent as a Babe, as simple and strong as a Promise kept.

Caregivers are shepherds. We care for our sheep in lonely pastures, often in the dark. But, like Christmas, the miracles come. We know angels are singing, and sometimes we can hear them. We know the guiding star is bright, and sometimes we catch sight of it through the clouds. Regardless, we know. We believe. We give thanks.

And there were shepherds living out in the fields nearby, keeping watch over their flocks at night.  An angel of the Lord appeared to them, and the glory of the Lord shone around them, and they were terrified.  But the angel said to them, “Do not be afraid. I bring you good news that will cause great joy for all the people.  Today in the town of David a Savior has been born to you; he is the Messiah, the Lord.  This will be a sign to you: You will find a baby wrapped in cloths and lying in a manger.”

Suddenly a great company of the heavenly host appeared with the angel, praising God and saying,

“Glory to God in the highest heaven,
and on earth peace to those on whom his favor rests.”

When the angels had left them and gone into heaven, the shepherds said to one another, “Let’s go to Bethlehem and see this thing that has happened, which the Lord has told us about.”

So they hurried off and found Mary and Joseph, and the baby, who was lying in the manger. When they had seen him, they spread the word concerning what had been told them about this child,  and all who heard it were amazed at what the shepherds said to them.  But Mary treasured up all these things and pondered them in her heart.  The shepherds returned, glorifying and praising God for all the things they had heard and seen, which were just as they had been told.               Luke 2:8-20 (NIV)